MINNEAPOLIS (AP) — George Floyd died of a lack of oxygen from the way he was held down by police, a retired forensic pathologist testified Friday at former Officer Derek Chauvin’s murder trial.

The testimony of Lindsey Thomas, who retired in 2017 from the Hennepin County Medical Examiner’s office in Minneapolis, bolstered the accounts of other experts on Thursday who rejected the defense theory that Floyd’s drug use and underlying health problems killed him.

Thomas did not work on Floyd’s case but agreed with the findings of her former colleague Hennepin County Medical Examiner Andrew Baker that Floyd died from cardiopulmonary arrest complicated by the way law enforcement restrained him and compressed his neck.

But she went further in saying “the primary mechanism of death is asphyxia, or low oxygen.”

“This is a death where both the heart and lungs stopped working. The point is, it’s due to law enforcement subdual, restraint and compression,” Thomas said. “The activities of the law enforcement officers resulted in Mr. Floyd’s death.”

Thomas said she reached her conclusion primarily from the video, which showed Floyd “in a position where he was unable to adequately breathe.” 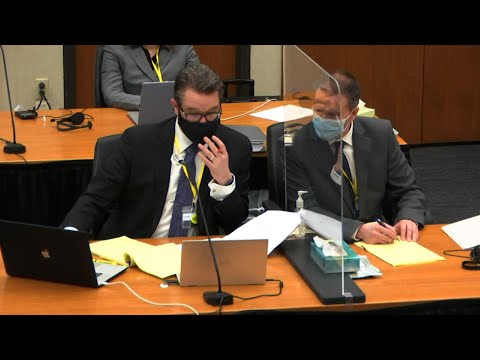 The autopsy itself ruled out heart attack, aneurysm, COVID-19 and other factors, and Thomas said the video showed it was not a fentanyl overdose death.

Her testimony came a day after other medical experts also said Floyd died of a lack of oxygen.

“A healthy person subjected to what Mr. Floyd was subjected to would have died,” prosecution witness Dr. Martin Tobin, a lung and critical care specialist at the Edward Hines Jr. VA Hospital and Loyola University’s medical school in Illinois, testified Thursday.

Tobin said the lack of oxygen resulted in brain damage and caused Floyd’s heart to stop.

Chauvin, 45, is charged with murder and manslaughter in Floyd’s death May 25 after kneeling on him for what prosecutors say was 9 1/2 minutes. Floyd was arrested outside a neighborhood market after being accused of trying to pass a counterfeit $20 bill.

Bystander video of Floyd crying that he couldn’t breathe as onlookers yelled at the white officer to get off him sparked protests and scattered violence around the U.S.

Chauvin attorney Eric Nelson has argued that Chauvin did what he was trained to do and that Floyd’s death was caused by illegal drugs and underlying medical problems, including high blood pressure and heart disease. An autopsy found fentanyl and methamphetamine in his system.

Using easy-to-understand language to explain medical concepts and even loosening his necktie to illustrate a point, Tobin told the jury that Floyd’s breathing was severely constricted while Chauvin and two other Minneapolis officers held the 46-year-old Black man down on his stomach with his hands cuffed behind him and his face jammed against the ground.

Tobin, analyzing images of the three officers restraining Floyd for what prosecutors say was almost 9 1/2 minutes, testified that Chauvin’s knee was “virtually on the neck” more than 90% of the time.

He said several other factors also made it difficult for Floyd to breathe: officers lifting up on the suspect’s handcuffs, the hard pavement, his prone position, his turned head and a knee on his back.

Tobin also testified that just because Floyd was talking and can be seen moving on video doesn’t mean he was breathing adequately. He said a leg movement seen in the footage was an involuntary sign of a fatal brain injury, and that a person can continue to speak until the airway narrows to 15%, after which “you are in deep trouble.”

Officers can be heard on video telling Floyd that if he can talk, he can breathe.

Find AP’s full coverage of the death of George Floyd at: https://apnews.com/hub/death-of-george-floyd

LITTLE ROCK, Ark. (AP) — Arkansas’ capital city is dropping its requirement to wear a mask to combat the coronavirus...

President Joe Biden met Friday with six immigrants who benefited from an Obama-era policy that protected those brought to the...

US calls reports of migrant children in buses ‘unacceptable’

Reports of unaccompanied migrant children being forced to stay overnight in parked buses at the Dallas convention center are “completely...

JACKSON, Miss. (AP) — Mississippi will remain in the minority of states without a medical marijuana program after the state...

This website uses cookies to improve your experience while you navigate through the website. Out of these, the cookies that are categorized as necessary are stored on your browser as they are essential for the working of basic functionalities of the website. We also use third-party cookies that help us analyze and understand how you use this website. These cookies will be stored in your browser only with your consent. You also have the option to opt-out of these cookies. But opting out of some of these cookies may affect your browsing experience.
Necessary Always Enabled

Performance cookies are used to understand and analyze the key performance indexes of the website which helps in delivering a better user experience for the visitors.

Analytical cookies are used to understand how visitors interact with the website. These cookies help provide information on metrics the number of visitors, bounce rate, traffic source, etc.

Advertisement cookies are used to provide visitors with relevant ads and marketing campaigns. These cookies track visitors across websites and collect information to provide customized ads.

Other uncategorized cookies are those that are being analyzed and have not been classified into a category as yet.